SCIENTISTS DISCOVER PROTEIN IN A METEORITE

For the first time, scientists found a complete protein molecule in a meteorite — and they’re pretty sure it didn’t come from Earth.

After analyzing samples from the meteorite Acfer 086, a team of researchers from Harvard University and the biotech companies PLEX Corporation and Bruker Scientific found that the protein’s building blocks differed chemically from terrestrial protein. As they write in their research, which they shared on ArXiv on Saturday, “this is the first report of a protein from any extra-terrestrial source.”

A protein is an organic molecule made up of building blocks called amino acids. It’s a high-energy fuel source and also makes up most of the machinery within biological cells. Scientists first found amino acids — or at least amino acid-like molecules — in space years ago, and other molecules important to biological life have also turned up.

The researchers say that since then, chains of amino acids have also been spotted, but none large or organized enough to be considered a full protein.

The paper — which has yet to go through academic review or be published in a scientific journal — bolsters the hypothesis that meteorite impacts could have contributed to the development of life on Earth. It’s possible that some of the molecules or compounds necessary for life to emerge and thrive were delivered through a bombardment of space rocks.

What it doesn’t confirm is that there’s extraterrestrial life out there. The research doesn’t determine where this unearthly protein came from or how it formed — the scientists are just confident it didn’t come from here.

A US daredevil pilot has been killed during an attempted launch of a homemade rocket in the Californian desert.
"Mad" Mike Hughes, 64, crash-landed his steam-powered rocket shortly after take-off near Barstow on Saturday.
A video on social media shows a rocket being fired into the sky before plummeting to the ground nearby.
Hughes was well-known for his belief that the Earth was flat. He hoped to prove his theory by going to space.
Saturday's launch was reportedly filmed as part of Homemade Astronauts, a new TV series about amateur rocket makers to be aired on the US Science Channel. The project had to be carried out on a tight budget.
With the help of his partner Waldo Stakes, Hughes was trying to reach an altitude of 5,000ft (1,525m) while riding his steam-powered rocket, according to Space.com.
In the video of the launch, a parachute can be seen trailing behind the rocket, apparently deployed too early, seconds after take-off.
In a tweet, the Science Channel said Hughes had died pursuing his dream. 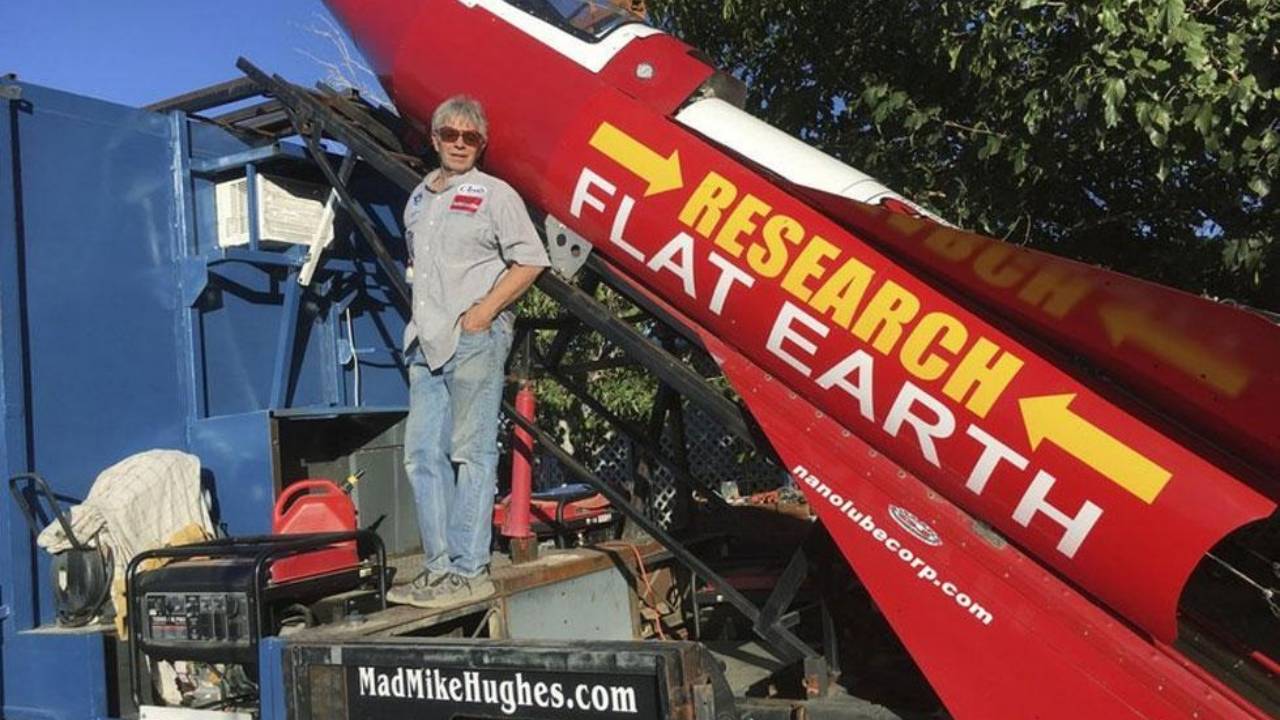